The music is what used to be called “Contemporary Adult Instrumental”, ranging between sophisticated swinging rock and accessible jazz, sort of like a jamming Chris Cross or James Taylor backup band. The team delivers some cool Caribbean tones on the cheerful “Magunda” and sound Weather Reportish on the echoey “Starburst”, propelled by some nice grooves by Owen and Phil Templer. A four-part “California Suite” rocks out on “Kings Canyon” synthy spaciousness of “Deserts” with the team showing its funky side on the album closer “Cruising Altitude”. An overlooked genre that gets revisited with style.

It has been over a decade since Axiom, a top-notch fusion quintet
co-led by guitarist Peter Templer and drummer Phil Templer, had recorded.
Starburst continues in their earlier direction of creative 1970s/80s-style
fusion.

The brothers are joined by either Alan Palmer or Frank Villafranca
on reeds, keyboardist Jared Stewart, and one of four bassists. The
ensemble-oriented performances have a rockish sound, feature strong
musicianship, and contain catchy melodies and grooves along with inventive solos. "Vaporware" puts the focus on the passionate guitarist, Villafranca's soprano on "Indigo Wave" and Palmer's flute on "Magunda" are noteworthy,"Mountain Dream" (part of a four-part "California Suite") is high-quality easy-listening music, and "Starburst" is the most ambitious and exciting performance. 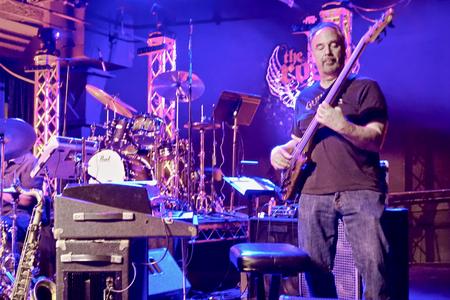 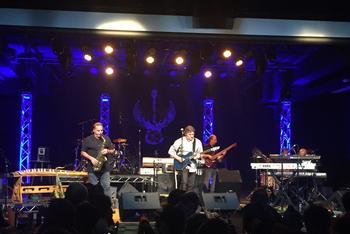 Starburst? What’s that, you say? Exotic and eclectic, high octane jazz fusion Axiom named their first album in over a decade after fruit chews? OK, so the colorful album cover lets us know that brothers Pete (guitars) and Phil Templer (drums/percussion) and their explosive all-star ensemble have more celestial ideas in mind.

To that end, the rocking and freewheeling opener “Vaporware” (a favorite opener at their live shows) soars mightily to high heaven and easily flowing tunes like the moody, pop/gospel tinged title track ballad start as meditations before taking off on some George Dukesque spacy synth runs. But the candy metaphor works just as well, not only because the duo’s melodies (even on the more bustling productions) linger like the tanginess of the chew, but because of the many wild, often exotic textural colors (and rhythms) they introduce along the way.

So while “Vaporware” is an in your face electric guitarist’s dream, the hypnotic Afro-jazz waltz “Indigo Wave,” is pure offbeat soul seduction with a fascinating synth solo by Jared Stewart of Shadowfax. Expanding on that into a more mainstream Latin flow, the sensual “Magunda” soars with flute and a synth generated sitar effect.

For all those engaging charms, perhaps the most compelling part of the sonic surprise filled nine track collection is The California Suite, a stunning, rhythmically varied four song movement that celebrates nature and its ebb and flow between wild fury and gentle peace.

Putting a unique flow melody and groove front and center The Templers take us from the spirited majesty of ‘Kings Canyon” and a passionate, sax driven “Mountain Dream” (sax courtesy of Frank Villafranca) to a fiery sax and guitar driven “West Coast Encounter” and a lyrical drive through endless, sweeping “Deserts.”

Those who love the classic sound of Return To Forever, Mahavishnu Orchestra and early Weather Report will find much to enjoy on Axiom'sStarburst, which is available from www.axiommusic.net.

AXIOM/Starburst: When you've been at it for a long enough time, you can either come in with competent sonombulance or effortless badassery. Back in the groove after a decade away, Axiom got the effortless and the badassery down to a science. A smoking fusion date that isn't stuck in the past but isn't precious under the guise of being forward thinking, it's loaded with the right sound at the right time, particularly when adults need some new sounds for the summer that wasn't. Take that consultants, this is what the future of fusion should have been. Hot stuff.
(Xtrasensory)Type your paragraph here.

Brothers Phil (drums) and Pete (guitar) Templar have resurrected Axiom, their long-dormant jazz-rock fusion band, for the release of the terrific Starburst (Extrasensory Records), their self-produced, all-original gem with a cast of nine. Leaning towards instrumental Progressive Rock, it still contains enough Latin and Funk to flesh out what the brothers call “Contemporary Jazz Fusion.” Opening with “Vaporware,” a solid romp of prog, continuing with “Indigo Wave,” sounding like an Afro-Cuban Waltz, and “Magunda,” complete with Santana flourishes. Although most of the attention will probably focus on the four-track “California Suite,” which goes through such a myriad of changes, you’ll need a scorecard to keep up with the action, the highlight has to be the title track, a zippy little slice of deliciousness. Bravo!